Synopsis (provided by IMDb.com): A frustrated son tries to determine the fact from fiction in his dying father’s life.

Notes: I have to say this film is definitely in my top 3 favorite films directed by Tim Burton. It was cinematically astonishing, and the story was so beautiful. It’s also probably my favorite Ewan McGregor performance (which might change after Dr. Sleep is released, we’ll see). I haven’t cried during a film in a while, this one got to me!

Synopsis (provided by IMDb.com): The events of one evening take an unexpected turn for the worst for a young boy trying to spy on his babysitter.

Notes: This was another film I just pushed back watching because it just didn’t really interest me. I’m very happy I finally gave it a chance! Though it wasn’t very funny, I loved the characters and it was still a clever film. I love how the members of the cult were the stereotypical slasher victims. Also, the ending was just epic, and the film provided good character development!

I Am The Pretty Thing That Lives In The House

Synopsis (provided by IMDb.com): A young nurse takes care of an elderly author who lives in a haunted house.

Notes: I’d have to say I absolutely loved the narration in this film. Unfortunately, the beautiful narration surrounded a film that went practically nowhere. It gave us a good build-up to an intriguing ghost story, and gave us very little, if any, payoff. Although, the director, Oz Perkins, did leave some references to his father, Anthony Perkins, and I thought that was sweet and worth mentioning here. The film, as a whole, definitely needed more to it.

Synopsis (provided by IMDb.com): In 1850s Oregon, the infamous duo of assassins, Eli and Charlie Sisters, chase a gold prospector and his unexpected ally.

Notes: I really need to start watching more westerns because all the ones I’ve seen so far I loved. This film is no exception. To start, John C. Reilly and Joaquin Phoenix had great chemistry and worked so well together. I really had no idea what to expect in the film, but I was very satisfied with the ending.

Synopsis (provided by IMDb.com): A vampire countess needs to drink the blood of a virgin in order to keep her eternal beauty. It seems that all is hopeless, until she bumps into Mark Kendall.

Notes: This is a pure ‘80s vampire comedy that brings a unique story. Well, it’s unique to me. Jim Carrey doesn’t miss a single comedic beat, especially during the Halloween dance scene. There is a shower scene that definitely didn’t age well. That being said, this was still a decent Halloween flick!

Synopsis (provided by IMDb.com): The sadistic members of a villainous family return to their childhood home to terrorize the new home owners and their guests.

Notes: I loved the realistic home invasion setting. It made the atmosphere and pace really tense. I think Rebecca De Mornay did a fantastic job as Mother. Though, when it comes to the protagonists, there was only one who I was really rooting for. George (Shawn Ashmore) kept his cool throughout and tried to help in any way he could. We don’t get a lot of characters like him in horror films nowadays. The ending disappointed me a little bit, but it was still one of my favorite horror films I watched this month! 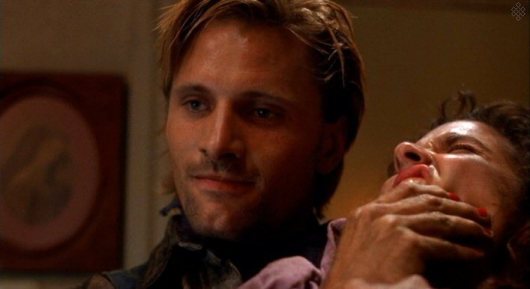 Synopsis (provided by IMDb.com): A California couple and a survivalist encounter Leatherface and his family.

Notes: This installment is now one of my favorite films in the Texas Chainsaw Massacre franchise! A film will always get points from me for having Ken Foree in it. Plus, it was really cool to see a young Viggo Mortensen in a slasher like this. He was able to play the charming and manipulative Tex so well. I was hesitant to see this one after my disappointment with The Texas Chainsaw Massacre 2, but I’m happy I gave it a shot. I’m especially happy with the end of the film.

The Masque of The Red Death

Synopsis (provided by IMDb.com): A European prince terrorizes the local peasantry while using his castle as a refuge against the “Red Death” plague that stalks the land.

Notes: Because it has horror master, Vincent Price in it, I wanted to like this film so bad! Though his performance was fantastic, as always, I found myself a little bored. I will admit the ending was done really well. Those are about the only praises I have for it. This was definitely a one-and-done film for me.

Synopsis (provided by IMDb.com): Kazakh TV talking head Borat is dispatched to the United States to report on the country’s customs and culture. With a documentary crew in tow, Borat becomes more interested in locating and marrying Pamela Anderson.

Notes: This film was hilarious, and there’s no way in hell it could be made today! I really enjoy the concept of a film having an overall plot, but brings in real people who have no idea what’s going on, and getting genuine reactions to over-the-top stints. Sascha Baron Cohen is at his absolute best in this film and I highly recommend it for those with a dark sense of humor!

Synopsis (provided by IMDb.com): Held captive for 7 years in an enclosed space, a woman and her young son finally gain their freedom, allowing the boy to experience the outside world for the first time.

Notes: This film was such an emotional roller coaster. The first half was so intense and it stressed me out so much. By the time I got to the second half of the film, I was left emotionally exhausted. It was a heartbreaking and realistic experience that made it really hard to watch. I know that people aren’t really a fan of Brie Larson right now, but she did a wonderful job portraying a trauma victim, having to cope and return to a normal life after what she dealt with.

Into The Night: Portraits of Life and Death

Synopsis: A documentary about the subject of death, where people discuss their first encounter with death, their ways of coping with the thought of dying, and their beliefs on the meaning of it all.

Notes: I was completely fascinated with the topics discussed in this documentary. I listened to all the different subjects about death: how people first experienced loss, how they believe they’ll cheat death eventually, and how they’re coping with their own mortality. It’s overall an intriguing discussion and it made me reflect on my own life.

Synopsis (provided by IMDb.com): A married man’s one-night stand comes back to haunt him when that lover begins to stalk him and his family.

Notes: For the last film of the month, Fatal Attraction was an excellent choice. I was very surprised with Glenn Close’s performance. She was able to switch personalities so well, and she can play a fantastic psychopath. Though I already knew how it ended, it was still very satisfying to see after watching everything that happened before. This is definitely not a film you should miss!