This may be a little off topic, but it’s been on my mind all day and I just wanted to talk about it. Now I’ve come across quite a few articles discussing many plot holes in the famous TV series, Friends. A lot of them I agree with, like Chandler and Rachel meeting each other three different times throughout the show, and forgetting each other every single time.

Or like how Phoebe is supposedly fluent in French, but didn’t know “sous” was French for “under”. 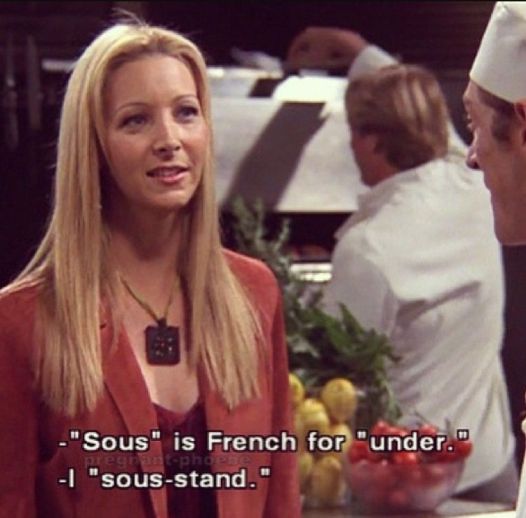 There was one plot hole in particular that caught my interest though. It was the fact that Chandler said “I love you” to Monica twice, with each time acted like it was the first time. When I first read about this, I initially agreed, chalking it up to another continuity error on the writers’ part. However, over time I couldn’t get the subject out of my head, now I want to share why I don’t consider it a plot hole. The first time Chandler says “I love you” was in the 8th episode of season 5, The One With All The Thanksgivings. In the episode, Chandler learned that years ago, he lost the tip of his toe because of Monica’s plan for revenge gone HORRIBLY wrong! Monica decided she needed to make it up to him, so she put a turkey on her head, complimented the ensemble with a hat and glasses, then danced for him. Amused, Chandler blurted out he loved her, to which she responded by freaking out. Then in classic Chandler form, he freaked out and tried to backtrack his statement.

Now, let’s jump ahead to the 14th episode, The One Where Everybody Finds Out. In this episode, Phoebe and Rachel hatched a scheme to get Chandler and Monica to admit they’re sleeping together. The plan was for Phoebe to act like she was seducing Chandler. When Monica and Chandler find out about this plan, they retaliated by making Phoebe think Chandler wanted her too. The plan went too far, eventually leading to a cringe-filled kiss by Chandler and Phoebe. Chandler pulled back and declared his love for Monica on the spot. The plan was finally foiled and everyone knew their love for each other.. except for Ross, of course.

Now the first time he said “I love you” was a clear slip. BUT, the second time he says it, it was a pivotal moment, because Chandler, the guy absolutely terrified of commitment, finally came to terms with his love for Monica. As for Monica’s reaction the second time around, I believe she was genuinely surprised he finally admitted, WITHOUT backtracking, that he was in love with her. It was a beautiful moment, and that’s why I don’t believe this scenario was an actual plot hole. The first scenario was treated in classic friends fashion, but the second scenario brought true character development. We see Chandler’s growth between these two scenes, and their growth as a couple. Can you tell they’re my favorite Friends couple?

One thought on “My Thoughts On A ‘Friends’ “Plot Hole””