For my brother Bub’s birthday, my family and I decided to go see IT: Chapter 2. My mother, my sister Melissa, her friend Vicki, and Bub’s friend Logan, drove up to Westminster to celebrate with him. We Ubered over to the nearest theater, The Alamo Drafthouse Cinema. Let me tell you, this place was absolutely fantastic!

I’m not going too much into detail about the film itself, because that’s going to be saved for a different post. But I will say I loved the film even more second time around!

We got inside and the interior is absolutely beautiful. The lobby is this little area that had merchandise from all of these different films and TV shows. Then we got into the hallway, where all of these posters from older films were on the walls. What I was most impressed with was the fact that they had missing posters of The Losers’ Club, shoes, and doll heads hanging from the ceiling. I just love good horror promoting and marketing like that! 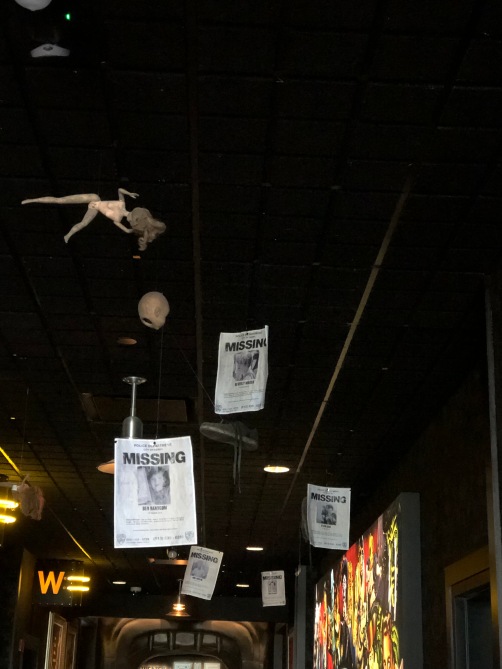 This was my first time being in an Alamo Drafthouse Cinema, so it was a great surprise to learn that they bring your popcorn and drinks right to you throughout the film. Plus, they had a really cool Chapter 2 menu with signature drinks. I ordered the Losers’ Spritz and I thought it was delicious.

The lady who served us was very nice and tried her best not to be interruptive. They even had Georgie (Jackson Robert Scott) warn people that if they were too loud in the theater, “You’ll float too!” Which was adorable. But then they gave a more stern message saying that customers will only get one warning before being kicked out. Knowing how loud my family sometimes gets, I was admittedly a little worried, but everything was just fine.

In the movie, when it got to the part where Bill (James McAvoy) said, “Losers stick together”, my brother showed me the Losers’ Club pin I gave him a while ago. In that moment, I felt a little bit closer to my family. Watching movies with my family is always a wonderful bonding moment. It’s what always connected us. It’s memories like this that I’ll forever cherish.

The Alamo Drafthouse Cinema gave me a truly epic experience. They even have a drive-in theater on the side of the building! If it was closer to where I live, I’d make it my new go-to theater.