After seeing The Rocky Horror Picture Show, I’ve heard many people talk about how amazing it is to see it performed live. It seemed like an awesome experience, so I decided to add it to my bucket list. Well, in October 2017, they had a show in Colorado, and I finally got to see it!

(I want to apologize in advance because I haven’t seen these pictures in two years, and I didn’t realize their quality was poor.) 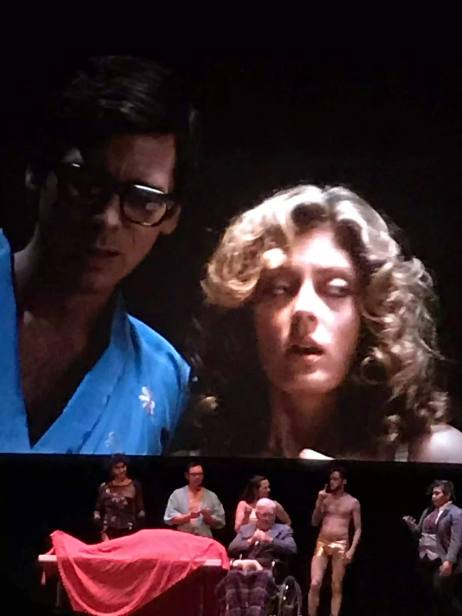 There was a costume contest at the event, but unfortunately I couldn’t afford a costume, so I couldn’t dress up for the occasion. The best I could do was paint my nails – very, very poorly. 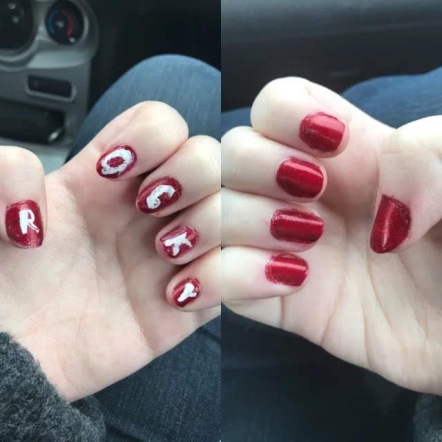 I went with my mother, my sister, Melissa, and her boyfriend, Anthony. This was actually the first time I met Anthony, and considering he didn’t know anything about Rocky Horror beforehand, I thought this was a hell of a first impression! The seats we purchased were pretty far from the stage, but there were plenty of open seats that were a lot closer, so they told us we could move, so we technically got better seats for a cheaper price.

Before the show, we were able to purchase some goodie bags filled with items used for the movie. Strangely, my bag contained a condom in it. There was apparently another contest I wasn’t aware of. Everyone who had a condom in their goodie bag had to go up on stage, but, I was too scared to be on stage so I chickened out. I don’t regret it though because in the contest, the contestants had to blow their condoms up like balloons and the first one that popped won. That’s one of the few times I’m glad I chickened out. When the film finally started, I wondered what they were going to do for the big lips that sing the first song. Well I got my answer pretty quickly when a person wearing BIG lips stepped out! 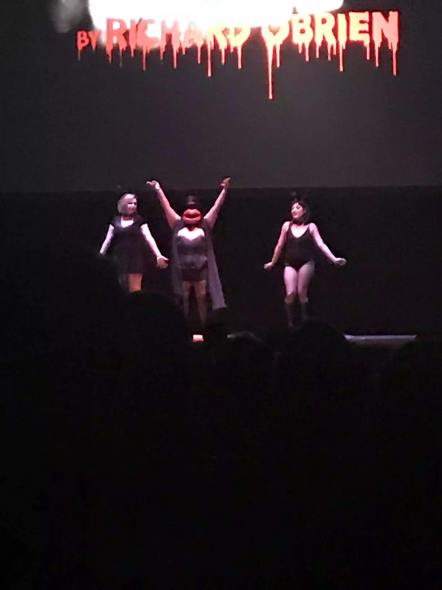 Then, my sister took the opportunity to take my glow stick out of my goodie bag and light it, so I had to hide it to avoid the attention. It’s actually funny, because when There’s A Light came on, I completely forgot about it, until I saw a bunch of glow sticks shot up into the air. There were actually a few props I forgot. For instance, we each had a glove and I actually thought I was supposed to put it on, but it was so we could snap it when Frank-N-Furter (Tim Curry) snapped his.

I felt pretty embarrassed about that. Then we got to the Time Warp, and you bet I was going to stand up and dance! As we continued the movie, I started to get a little frustrated. When seeing a live show, I understand that the audience has to be just as lively. However, I couldn’t understand what anyone was shouting out, so I found it more disruptive than entertaining. We finally got to Frank-N-Furter’s final song, I’m Going Home, and I finally felt the experience as we all threw our cards in the air.

Barry Bostwick (Brad) was there to do a Q & A after the show, but Melissa wanted to leave right after the movie was over. I’m not mad about it though, because, thinking about it now, I’m not sure I even told her that Barry was there. The overall experience wasn’t what I was hoping for, but I’m still very happy I got the chance to do it. I’m very happy I got to experience it with my family and I could finally cross it off of my bucket list! 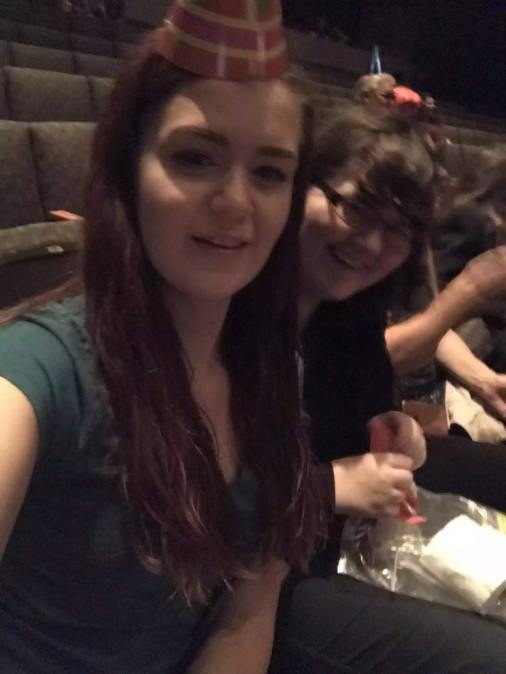 One thought on “Watching A Live Performance Of ‘Rocky Horror’”