Welcome to a new segment on my blog, Behind The Scenes Saturday! The title is pretty self-explanatory. It’s where I share some interesting facts and awesome behind the scenes pictures from some of my favorite films! I chose Scream for my first BTS post because it is my favorite horror film of all time, and it seemed like the perfect start! 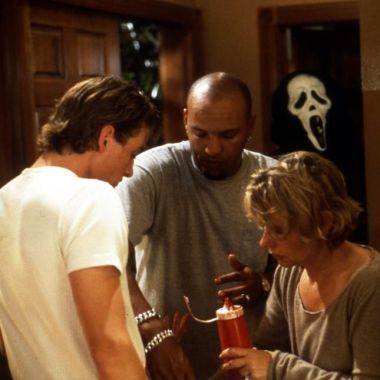 1. In the scene where Billy(Skeet Ulrich) flips out and tosses the phone at Stu(Matthew Lillard), it apparently was completely unintentional. The phone slipped out of Skeet’s hand and hit Matthew in the head, prompting him to say, “You Fucking hit me with the phone, Dick!” Director Wes Craven decided to keep the scene in the film because of that realistic reaction.

2. That’s not the only ad-libbing in this film. There were seemingly a few genuine lines that actors came up with on the spot, including:

Matthew Lillard (crying): My mom and dad are going to be so mad at me!

Matthew Lillard (after seeing his gun is gone): Ah.. Houston, we have a problem.

Matthew Lillard: I always has a thing for ya, Sid!

Neve Campbell: In your dreams!

3. The high school scenes were originally supposed to be filmed at Santa Rosa High School in California. However, the school board, who was originally under the impression that it was going to be a comedy, changed their minds after reading the script. That’s why, during the Special Thanks section of the film’s end credits, we see “NO THANKS WHATSOEVER TO THE SANTA ROSA CITY SCHOOL DISTRICT GOVERNING BOARD.”

4. After learning what an animal lover Drew Barrymore was, Wes Craven used that information to his advantage during her crying scenes. During a commentary, Craven stated, “The night before we started shooting, she told me a horrible story about a newspaper article about a dog being burnt by its owner. Petrified her, and she started crying as she was telling me this. So, every time that I needed her to get over that edge and into complete tears, I would just say: ‘Drew, lightning the lighter’ and she would just burst into tears.”

5. During filming Tatum’s death scene, Rose McGowan discovered she actually could fit through a pet door. She kept falling out, so they had to nail her shirt to the inside of the garage door to keep her from falling out. 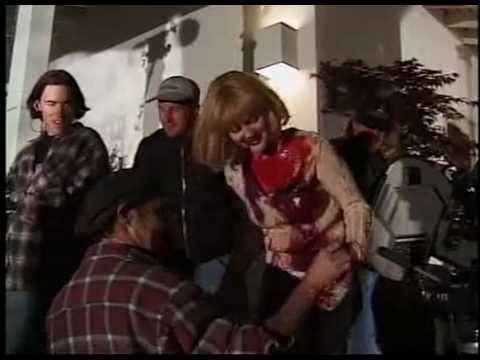 6. Tatum’s death originally didn’t even involve a pet door. The door was originally going to come down on her neck after she had a fist fight with the killer. The idea for a pet door came from the assistant of Scream writer, Kevin Williamson.

7. In Scream, Wes Craven provides one of the best director cameos in horror history. He plays Fred, the janitor. He’s wearing a red and green striped sweater and a fedora, which is an obvious homage to A Nightmare On Elm Street!

10. Though the Ghostface killer was mostly played by stuntmen, Skeet Ulrich asked if he could wear the costume for at least one scene. He ended up being the one in the costume in the scene where the killer is sneaking up behind Randy as he’s watching Halloween.

11. When Billy gets stabbed with an umbrella, there was a pad on Skeet Ulrich’s chest for the stuntman to hit. The first stab hit the pad, but the second stab missed completely and hit him in the chest. Skeet had open-heart surgery when he was a child, and had metal wiring underneath his skin RIGHT where the umbrella hit him. Wes Craven ended up keeping that take because of Skeet’s genuine scream of pain.

12. Dewey was originally supposed to die from the stab wound in his back. However, after seeing how much test audiences loved Dewey, Wes decided to include the scene where he’s put into the ambulance. The next time you watch Scream, you should be able to see that Dewey isn’t breathing when he’s on the porch, because he was supposed to be dead, not unconscious.

13. While scouting for film locations in California, Wes Craven came across a mask that inspired him for the Ghostface mask we all know and love. He was in a house he was possibly wanting to film in when he came across the mask on a wall in one of the bedrooms. Wes sent a picture of it to Dimension Films, and as they didn’t own the rights to the mask, they told him to have the prop department make a similar mask.

14. The voice of the killer was done by Roger Jackson. Neve Campbell and Drew Barrymore didn’t meet Roger prior to shooting their scenes together. This was intentional in order to inspire fear and tension for the actresses, as they truly didn’t know who they were talking to.

15. Scream’s original title was Scary Movie. The title, as we all know, was claimed for the film’s parody, Scary Movie, which also parodied I Know What You Did Last Summer. 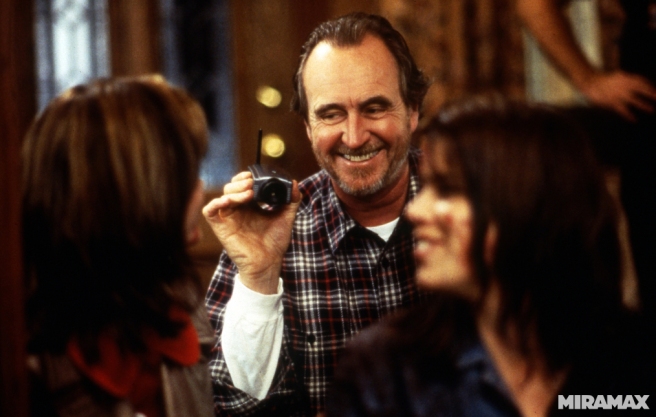 16. At the end of the script, Kevin Williamson wrote a 5 page treatment for Scream 2, which was turned into a full script following Scream’s success at the box-office.

17. During Principal Himbry’s death scene, when Henry Winkler opens the closet, you can see his signature Fonzie jacket from Happy Days hanging in it.

18. Courtney Cox was interested in playing a bitchy character who was different from her character in Friends, so she approached the production and pursued the role. She was initially turned down because of her more polite persona. However, she was able to prove she could perfect this role.

19. Wes Craven initially turned down this movie because it was too violent to him. What convinced him to direct were the fans who praised The Hills Have Eyes(1977)  and told him it was his best film. He wanted to make one last gory film for them. Of course, Scream wasn’t his last gory film.

20. Wes wanted Neve Campbell to audition after seeing her in Party of Five. He knew she could portray a character who was innocent, but could hold her own in stressful conflict required for Sydney Prescott.

21. Matthew Lillard’s involvement in Scream happened completely by chance. In the building where they were holding auditions for Scream, Matthew was taking his girlfriend at the time to an audition for an unrelated project. He was noticed by Scream’s casting director, Lisa Beach, who asked him to audition. It’s stated that he got into the role with “incredible ferocity”.

22. At the beginning of the film, when Ghostface smashes his head through Casey’s window and she hits him with her phone, Wes Craven was the one wearing the costume, and Drew Barrymore really hit him in the face.

23. Wes Craven was the one who came up with the idea for Casey to take off the killer’s mask as he’s killing her.

24. One of the main signs that point to Stu being one of the killers is in one scene where Sydney is running from the killer in Stu’s house. One of the rooms she runs into had mutilated dolls hanging from the ceiling. It’s a lovely and messed up form of foreshadowing I didn’t even notice the first 100 times I watched the film.

25. Near the end of the film, Billy states how a film is always scarier when there’s no motive. Kevin Williamson was torn between giving his killers motivations or not. Opinions at the studio were also split on the subject. Williamson ended up compromising by giving Billy a clear motive and leaving Stu’s intentions more vague.

26. Kenny the cameraman’s death was initially supposed to be longer and more graphic. However, the scene had to be cut down to avoid an NC-17 rating. According to Wes Craven, the edited version removed all of the humanity out of the scene and in a way, sensationalized Kenny’s death, where the original didn’t. The original cut was described as Kenny staring at the killer in disbelief, in a way, questioning why he was being killed, as blood was flowing down his neck.

Well, I hope you enjoyed all of these fun facts! What are your thoughts on the Scream franchise? What are some of your favorite bits of movie trivia? Also, Let me know if there are any films you’d like me to cover in the future! 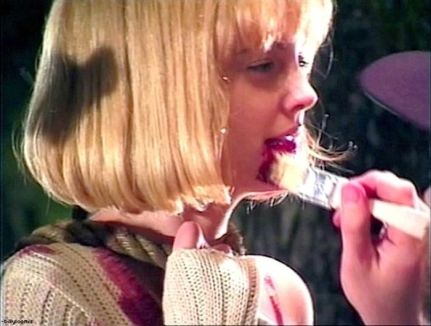 One thought on “Behind The Scenes Saturday: Scream”