We’ve almost reached the end of October, and I’m done with my horror movie marathon. Unfortunately, I didn’t get to watch much during the final days of this month, so part 3 of my mini-reviews is a bit short. If you’d like to check out what else I’ve seen this month, you can find part 1 here and part 2 here! Enjoy! 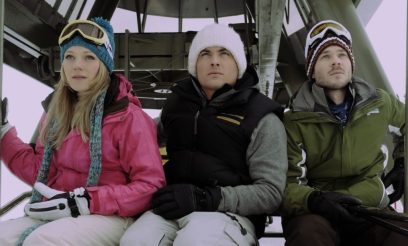 Synopsis (provided by IMDb.com): Three skiers stranded on a chairlift are forced to make life-or-death choices, which prove more perilous than staying put and freezing to death.

Notes: I watched the trailer to this film many times over the years without really developing an interest to watch the film. I finally gave it a shot, and I was pleasantly surprised! I really liked the main characters and their banter towards each other. It was a very tense thriller, and a terrifying situation to imagine being in. I was pretty disappointed with the ending. It seemed too easy and so different from the rest of the film.

Synopsis (provided by IMDb.com): A charming yet troubled man spirals into a rage after being rejected by the woman he initially induced.

Notes: This was unfortunately another “meh” movie. It’s always great seeing Wes Bentley (Patrick) play an obsessive bad guy, his performance definitely wasn’t the problem. The story was just bland and it’s all been done before. Plus, it advertised itself as a sort of “love triangle” film and barely showed the husband, Michael (Cam Gigandet). The pacing was very slow, and I almost didn’t finish it. It was definitely a one-and-done film for me.

Synopsis (provided by IMDb.com): Four teenage friends spend the night in a carnival funhouse and are stalked by a deformed man in a Frankenstein mask.

Notes: The Funhouse is a very entertaining film! The pacing was a little slow, but it still kept my attention the entire time. One of my problems with it is the characters. You have one who makes every bad decision imaginable, and another whose greatest asset was standing and staring at everything. I’d still recommend this film because it’s good ‘80s fun!